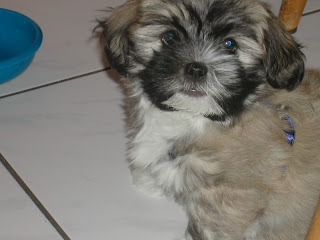 You know how sometimes a seemingly tiny act has huge repercussions? But it's hard to know just when the first, the very first action took place. Maybe it doesn't matter, since life seems to be circular or spiral. Whatever it is, it isn't a straight line with a clear beginning and end.

Something like this happened to me recently. One of the seemingly trivial things was a visit to my Becky, my godchild, one of whose many fears is a near panic attack at the thought of traveling on public transportation the many kilometers between her and me to come for a visit. I tried my desensitization program on her, but it just didn't work - she wouldn't come. When I finylly went to visit Becky a few months ago, she shared all that is near and dear to her with me, introducing me to her boyfriend and her pets. Just as I was about to leave, she said, "Noreen, I bought a dog book. Would you like to see it?" I commented that I had always wanted a dog, but that I couldn't have one because of my allergies. She said,"Oh, no, there are new breeds just for people with allergies. Look in the back of the book - you'll see." I looked, and fell in love with a schnoodle, a crossbreed of schnauzer and poodle. I went home and talked to Peter about it

We looked at pictures of schnoodles in the internet and videos of schnoodles in YouTube. But there were no schnoodles being bred in Germany, it seemed. I mentioned all this to my friend Denise, who has a cute little dog not that different in appearance from a schnoodle - a Havanese, named Jule.

"We're going to mate our Jule with another Havanese. If it works and she has puppies, would you like me to let you know?" I took a deep breath and said yes.

I've had to say a lot of yeses along the way, each of them after discussion with Peter. This was not that easy, because neither Peter nor I has ever had a dog - except the one he had for two days and his mother gave away because - surprise! - it peed all over the house. Our son Jon is 23 years old, basically gone from home, and now we're thinking of something on the order of a baby? Yes - because our house is too quiet. And because we had the suspicion that there was another important whole aspect of life we were missing out on.

Jule did conceive and deliver five cute little Havanese puppies. I had already forgotten my yes when I got a phone call from Denise.

"Wanna come and see your new puppy? I have him all picked out for you. We even have a name - Toffee, because he is the color of Toffifee candy."

Peter and I went to see him and fell in love with Toffee. His eyes were still shut, but he was a beautiful silky brown ball that throbbed warm life.

Before we were allowed to take him home (we had to wait eight long weeks - eight weeks to make up our minds for sure), we went out to a pet store and bought a kennel, a harness, a cushion, dried cow's ears! - and some dog food. We had to ask for help at every step of the way. We felt like new parents! We had other essential dog things like toys and a soft blanket from my other goddaughter, Sarah - her Christmas present to me.

We woke up the morning we were to bring him home, wondering about how Toffee would change our lives. Denise and her children shed a few tears as they saw Toffee and us leave, carrying the kennel with its precious cargo.

We started on our five-kilometer journey, Peter driving more carefully than he had ever driven, except perhaps the day we brought our son home from the hospital. Before we were even halfway home, Toffee threw up all over his new soft blanket in his kennel. He was either terrified or car sick! I learned my first new fact about dogs - they hate vomit. So our precious little puppy began to push the vomit off his blanket with his cute white paws, all the way through the bars of his kennel, onto my jacket. My first activity as a dog owner was to clean up the vomit and to launder the blanket.

We've had him for a week and a half now. I don't mind (usually) the many times he pees on the floor. He almost always chooses the hard laminated flooring, saving the carpet for his play area. He has only pooped once inside our apartment. Toffy is a smart dog! We have to carry him downstairs in our arms each time we think it's time to do a job. He coos audibly as he is carried. Then he shivers, sometimes violently, as he does his jobs on the snowy ground. He has learned that if he runs to the door, he will soon be warm again. So, up we walk the stairs, our little prince perched in Peter's or my arms, until we reach the apartment. Even before we reach it, he struggles to get down and tears into the living room or kitchen to consume some of the liquid he has just released.

We are besotted with him. Many hours have gone into playing. He likes hardtack! When we break a piece of it off for him to eat, he carries it in his mouth, storming onto his cushion, which he sometimes misses in his eagerness, sliding off onto the rug. But then onto the cushion he goes again, fighting the hardtack as though he had just caught a baby lion as prey. Cuddling is even nicer.

So what avalanche was released when I heard about the possibity of having a pet, even though I have allergies? Well, I don't sneeze or wheeze from Toffee. He's smooth as silk. He has been the catalyst in bringing two people to speak to each other, when they were previously not on speaking terms. He brought Becky to me - she braved public transportation to be able to see him. Now she's considering going back into therapy. Peter and I get all excited by little things like poops outdoors, the things he learns, and we melt from his big, round, curious button eyes.

Training him leaves us with as many questions as answers. He answers to "come" - sometimes, and to "sit". And that's about it. He is sweet as a bag of toffee, but he is still an unknown entity, someone who also loves to bite and pretend we're some kind of enemy. Just what kind of enemy and how far he would go with us, we don't know. So we've enrolled him in a dog school. Next week Toffee will be a student. We hope he graduates with honors. He will definitely graduate with one honor - he has won our hearts.
Posted by Noreen at 6:38 AM