A Pause on the Journey

“a man there was, though some did count him mad, the more he cast away the more he had.”
― John Bunyan, The Pilgrim's Progress From This World To That Which Is To Come 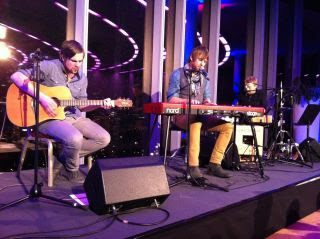 Photo courtesy of Kenneth Tschersich
Thank you, Kenneth.
Last night I went to listen to a fellow pilgrim sing about his experience. It was my second time to hear him.

The first time I heard Johannes Falk sing, it was at the Hard Rock Café, in the middle of the grunge of Cologne. Cologne is possibly Germany's dirtiest city, something that I find appealing. People either can't, or don't try to cover up the misery, aches, disappointment, even hopelessness lined on their faces. It is a bit scary when you try and sneak a closer look at the faces - there is so much pain walking down the streets of this city it can be overwhelming, if you stop to think about what you're looking at. But it's real, and I appreciate that. With reality, you at least know what you're looking at.

My son Jon came home from Seoul, Korea for Christmas. He's taking an intensive Korean course there. We went shopping one day after Christmas in Cologne. I asked him what it was like walking down Schildergasse, one of Cologne's main shopping thoroughfares, again.

"You see so many wasted people here," he said.

"Do people look fresher in Korea?" I asked.

It breaks my heart to see so many people lost in the shortcuts and diversions they have ended up in, trapped in dead-end streets. At least, that's what I think when I look at these faces. If only some of them could have wandered into the Hard Rock Café that evening. Maybe they could have found refreshment, and possibly a way out of the swamp. Almost everyone in the café looked clean-cut and wholesome, the very stereotype of a Christian. A good thing, as long as it is real.

Last night Johannes Falk sang again to the converted. But we, the converted, also have our times of pain, indecision and regret. The converted also feel lost sometimes as we journey along our path. At least, that's my experience. We have times when we can't articulate what's going on with our lives. Johannes gave words to these inchoate thoughts, his voice rising high above the city in a room at the top of Köln-Triangle, Cologne's tallest building. Behind him, through floor-to-ceiling windows, you could see Cologne, glittering behind the raindrops tracing pencil-sharp streams along the windows. From above, the city with its magnificent cathedral and the broad Rhine River shone in such beauty, my heart felt pierced with another kind of pain. I sat back, listened, and felt the pains and joys of my own journey expressed by another.

Johannes introduced the evening by telling us that a couple years back he spent some time reading John Bunyan's "The Pilgrim's Progresss". Although it was written in 1678, it speaks to us as much now as then, he said.

I read "The Pilgrim's Progress" decades ago, soon after I decided to become a follower of Jesus Christ. I found the reading hard going, but somehow exhilerating. Yes, I wanted to become a pilgrim too, to follow Jesus, no matter where that path would take me. I said yes to the rough parts.

Maybe I tended to dwell in the rough parts too long in the past. I still get tangled up in the weeds of "self-doubt". Funny, how these rough patches keep coming up. They're there, just as much as the beautiful panoramas. This journey is certainly not boring.

And that's what I like about Johannes Falk's lyrics. They aren't banal or clichéd. They don't trumpet out messages that may be true, but ring false because they don't feel experienced, at least by the listener. His texts are realistic, including the questions and repeated failures of life. Yes, of course, there is sunshine. And yes, the journey is progressive, not just cyclical. I am also convinced of what Johannes said - there is no better guide for our journey than Jesus Christ. But the road is not smooth. The lyrics are almost worth learning German for!

Just so that you can get a sense of what I'm talking about, I've translated one of the songs he sang, Ich such ein Leben. It also appears on his CD "Pilgerreise", which you can buy online at Amazon.de.

I'm Searching for a LifeTime is running outBeen sleeping long enoughon my hiking mapI really knew already that markers were formingin my dreamsI'm finally on my wayI long for faraway places, can't wait to get awayfrom my no man's landI'm finally on my wayI'm searching for a life that lasts foreverthat won't wilt like a flower in the fieldthat lasts longer than twenty-nine thousand daysthat won't one day silently peter out without a sound, without a songI can't get around itCan't take any detoursto extend my daysEver since the first cryMy clock has been ticking backwardsLeave this city ever fasterWhere will my life endon this swaying planeteven though it's also beautifulThere must be more
His music is also interesting and full of surprises. I love to hear his sensitive piano playing, which just as quickly turns into a powerful pulse of energy. There's no sappiness here. It feels real. Real like pure spring water, like the icy, bracing winter rain we had to scurry through to get to shelter at the top of the Triangle.
Posted by Noreen at 7:02 AM