The Beauty of Small Things


"My, but you do get around," several people have mentioned to me lately.  It's true.  During 2012 I was in Egypt, Paris, France three separate times, in England twice, Prague, Istanbul, and various places in Germany.  I've written about some of these places in here, and reading over my experiences, some of them sound pretty cool.  Some of these trips I've taken with Peter, while for others I was with others or completely on my own.  And yes, I have had some pretty exciting moments.  "Your life sounds so interesting," these people say wistfully.

Right now I'm on the go again, this time in the States, the country I was born and raised in.  I lived here until age 36, leaving for a trip that should have lasted about two months, but ended up living there permanently, after meeting, falling in love with and then marrying Peter.

We got married in a medieval castle, and rode in a white buggy led by a white horse to our fancy reception in a hotel several hundreds of years old.  "Your life is a fairy tale," said one of my friends when she saw our wedding photos.

I think I did all I could to nourish such ideas.  I fed and nourished myself for a few years on all the excitement of living in Europe, of being a new mother, of living in this wonderful new culture where the bathrooms and kitchens had tiled walls and we weighed all the ingredients on a metric scale as we cooked and baked.  I thought life in Europe was much more interesting, more exotic and superior to my old life in crime and graffiti-ridden New York City, which I had once thought superior to what I called "boring, flat" Minnesota.

And that's one reason I'm back here in the States.  Next week I'm going to a workshop in Pennsyolvania called "Breakthrough".  I need to break through in some areas.

One of the things I'm doing on this trip is visit my large family.  Since the end of December, I've been in Portland, Oregon, one of the huge suburban areas in California between Los Angeles and San Diego, and now I'm in Minnesota.  New York State and City are on my itinerary after the workshop,

My great discovery on this trip is the beauty in the small things.   I haven't done one glamorous thing since being "home" in the States.

In Oregon, I watched TV every evening with my sister and her family.  I discovered the TV series "John Adams".  What an amazing man he must have been.  To think that he and all our founding fathers were well acquainted with one another.  I saw that French morals and approaches to love were as fascinating to Benjamin Franklin and disturbing to John Adams as they are to millions of people these days.  The things you can learn, just watching a TV series!  I vowed to watch more TV.  I took photos of the "small" things - a stunning view of Mount Hood one can enjoy every day from my sister's dining room window, for example.

In California, my sister-in-law and I went bike riding in the neighborhood with the kids.  Nothing fancy, but I was fascinated by the Christmas decorations and lights on snowless lawns with palm trees in the yard.  I marveled at reindeer flying off a California roof. 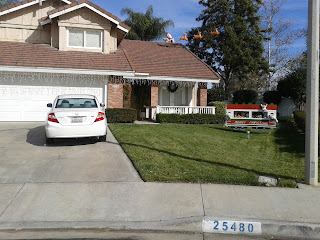 We went hiking up a hill just across the street from their house.  I marvelled at all the many mountains surrounding them, at the dirt road leading to humble houses built in the 1950s, houses with stunning viewsof these mountains, unspoiled by suburbia, but just blocks away from huge housing developments constructed in a few months in the '90s.,   We ate delicious ice cream my brother made for us.  "I make the best ice cream in the world," he boasts.  I agree.  It's better than Ben and Jerry's,  hitherto favorite ice cream.  Some day when I have access to the recipe, I'll publish it here.

On to Minnesota, where my family has other excellent cooks.  I'm staying at my aunt's, whom I've never spent so much time with as on this trip.  My brother invited us to dinner  It turned out to be a spectacular meal of four courses.  They had bruschetta, fantastic pork jerk that had been marinated for two days and glazed with raspberry sauce, and a fantastic mixed salad with walnuts, blue cheese and craisins (dried cranberries). 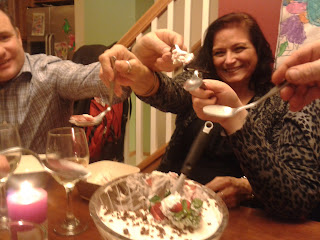 Look into the recipe section of this blog for the recipe.  My aunt had already invited my brother and sister to dinner later this week, and then lamented, ""How can I have you over to my house, when I make nothing special, after this amazing meal?"  We assured her that it would be fine.  We ate her food last night, and were all reminded of meals our Mom cooked during our childhood.  It was wonderful!  And we shared all sorts of stories, good and bad, sad and inspiring, about our family.

So, here is a tribute to the healing power of families, of revisiting those stories from the past, many of which are toxic, and finding restoration as we share and cry together, to the wonder of times shared together.  To the beauty of small things.  .
Posted by Noreen at 1:23 PM