Now our group is complete.  Dayeong, Jon’s girlfriend, has arrived in Istanbul from Seoul, Korea, on April 30.  Good thing it wasn’t on May Day.  Nobody has bothered to tell us that if we had booked her flight for one day later, she would have been unable to get to the hotel.

On days like this, May 1, it would be good to speak some of the language, to understand why the police are being so strict.  No one gave us any warning at all about what we would encounter today.  In some parts of Europe, including Germany, May 1 is a festive day, with dancing, flowers and maypoles.  In Belgium men give beautiful little lily of the valley bouquets to their girlfriends and wives.  The German word, in fact, for lilies of the valley is Maiglöckchen - "little Maybells".  In Germany itself, this custom is unknown, but there is another custom young lovers practice.  Young men, usually teenagers, “plant” little birch trees outside the windows of their girlfriends, stringing crepe paper ribbons on the branches.  Such sweet demonstrations of love.  There seems to be another, entirely ominous kind of demonstration on this day in Turkey, one which we are completely unprepared for .

It is a beautiful warm, sunny morning and we eat our breakfast outdoors in leisure, accompanied by a CD playing Tchaikovsky music.  The streets are quiet.  Everything seems exquisitely calm.  Today our plan is to go to historic Istanbul.  We will first go to Tünel, the funicular that transports people down a steep hill,  to join another tram across the Galata bridge, where we can arrive, after about three stops, in historic Istanbul.  We plan to see the Aya Sophia, the “Blue Mosque” and the Byzantine cisterns.  As we walk, we see that the shops are almost all closed.  How nice!  The workers deserve a day off.  After all, this is the European version of the American "Labor Day".  But as we reach the street to the Tünel, we are surprised to see wire fences in front of us, blocking us from access to the Tünel.  We walk up another street and manage to get to the square, but see that it is swarming with police, police buses and trucks.  A policeman with very limited English informs us that the funicular is not running.  Basta.  No more information.  Not to be daunted, we decide to descend the entire stretch on foot.  A policeman kindly lets us squeeze through his police barricade.  When we reach the Galata tower, one of Istanbul’s most famous tourist attractions, Jon notices that there are almost no tourists waiting in line to get to the top.  “Why don’t we quickly go up there and have a look?” he says.  “This would be nice for Dayeong.”

Peter and I wait at the foot of the tower, reading maps and tourist guides.  About a half hour later Jon and Dayeong return. “We can tell you that there’s no point in walking down to the tram,” Jon says.  “They’ve lifted the Galata Bridge – it’s in two parts now, and there are no ferry boats or trams running.”

I find a street vendor selling little “bird” models like the one Hezarfen, the world’s first aviator, used to fly from the Galata tower to the Asian side of the Bosphorus in 1638.  The vendor is eager to tell me the story of how great Hezarfus was because of  this feat.  Unfortunately, he had the bad luck to be murdered by the Sultan, simply for being on the Sultan’s bad side.

It seems as though the powers at be in Turkey are historically less than indulgent towards people who differ politically from them  They get arrested – or even murdered, as in the case of this poor aviator.  The vendor tells me that we are entirely sealed off from the rest of Istanbul.  There will be no metro service today, no buses, no trams, even the bridges are all closed.  We can't even walk up the Istiklal to Taksim Square. 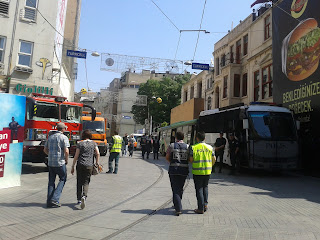 Jon and Dayeong decide to walk down towards the bridge, anyway.  Peter and I wander around the side streets leading off the Istiklal.  Everything is deserted, and every passageway leading onto the Istiklal is sealed off.  We rest in the lobby of one of those grand old hotels from the time of Queen Victoria and the sultans, hoping to be served a cup of tea.  As we wait, we idly play with the figures at a backgammon table in front of us.  "If only we knew how to play - we'd have something to do," I say.  We continue to be ignored by the waiter, but suddenly what's being shown on Turkish TV fascinates us.  We see mobs of policemen, many more than those we saw at Tünel, surrounding a few dozen demonstrators, showering them with water cascades.  A policewoman is carrying a tear gas mask.

I don’t know what the people are demonstrating about, or what the police or the government are afraid of.  I thought Turkey was a democracy.  Maybe people are allowed to demonstrate, providing they can get to the Taksim Square – the place where all the demonstrations take place – if they managed to get there the evening before and could afford the price of a hotel, and don’t mind being doused with pellets of water or a little tear gas.

Wikipedia says that this day, called “Workers’ Day” in Turkey, has historically been a day filled with rioting and violence, both on the side of the police as on that of the demonstrators.  On 1 May, 1977, there was even a massacre at Taksim Square.  Because of all the violence.  This “holiday” was banned in Turkey from 1981 until 2010.  As recently as 2007 there was a casualty in the demonstrations, and in 2011 there were over half a million demonstrators.

I later read in an English-language Turkish newspaper that the authorities have decided to grant demonstrators the right to demonstrate on this day.  We see no sign of this.  We also hear that there has been violence on both sides in this paltry demonstration with only the few participants that managed to break through the barricades.

I also read that the Turkish government is trying to remove artisans from the covered bazaar to some place on the outskirts of the city, far away from the public who would buy their wares, and from the city that inspires them.  On this day we learn that things in this ultra-modern city are not always as they seem.

In the afternoon, still stranded in Pera, the neighborhood where we are staying, Jon and Dayeong rejoin us, exhausted after having had to climb the steep hill from the water back up to Pera.  We walk together over to the nearby Pera Palace Hotel, the one I call the "Agatha Christie" hotel.  This is the hotel Agatha Christie stayed in when she wrote Murder on the Orient Express.  I'm told that if the room is empty, you can view it -  for the price of a tip.  This is a wonderful, grand old hotel built in the colonial era, complete with plush carpets, palms and orchids, cupolas, inlaid wood, and stained glass windows.  We enjoy afternoon tea in the English style, as we watch an Italian film crew film a soap opera segment - in Istanbul.  It's funny hearing them yell, "Action!" and "Cut!" in Italian-accented English.  We're all exiled colonialists today.


The only Turkish friend I’ve ever had disappeared one day from my life.  She told me how she would be arrested if she ever returned to Turkey.  She was once a communist and was arrested at a demonstration.  For all I know, it could have been at Taksim Square.  The conditions in prison were appalling, and her sentence was for many years.  She did nothing but participate in a demonstration.  She was granted parole after several years, and used the opportunity to flee from Turkey.  She applied for and received political asylum in Germany.  Later, years after we had lost contact with one another, I heard that Turkey had loosened up and was now allowing former dissidents back in.  I only hope that this poor woman, disillusioned by both Communism and Islam, has found a way back to her country and to a life of peace.  I am sure she will never be caught in a demonstration again.  She has found all sides to be cynical and hypocritical.  I believe God is there, though, waiting to be found.  God is over there, just beyond those demonstrators, on the other side of that mob of policemen.  And right here in my heart, offering us peace in the midst of violence.  Oh, to discover more and more of that kind of peace.