After less than three hours of sleep, we are awakened by the wakeup call at 5 am. We'll be crossing the Nile on a bus, crossing Luxor (ancient Thebes), heading for the Valley of the Kings. No matter, we are alert and ready for action! I take time to wash my face with the Neutrogena "Deep Cleanser" a friend told me would prevent future colds because of the salicylic acid it contains - and do my sinus wash. Mohammed told me we can eat the fruits and vegetables on board because the staff thoroughly washes them, so the water must be OK - I even read that the water is purified.

We're on our way. The road is paved, but the scenery is utterly foreign. I have been transported into Bible times. That man on the donkey, wearing a long robe, could easily be Joseph! 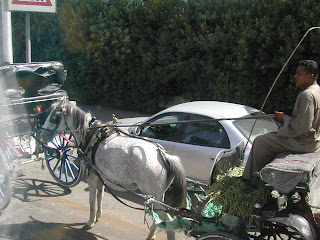 And the house - it looks just like the ones we saw pictured during Sunday school lessons - except for the satellite dishes on the roof. 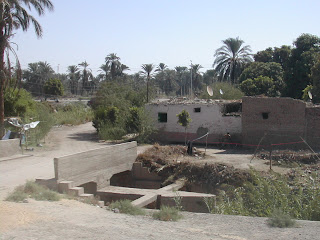 It all looks pretty primitive, but it draws me in like a magnet. I have never seen anything so exotic. I've never been in a Muslim country. My eyes can't take in enough. More, more!

We pass Hatshepsut's temple, nestled into the sandy hills behind the green plains of the Nile. We learn that she ruled for over 22 years (1479-1458 BC), officially only as co-regent, but in fact as ruler, and was one of the most successful and powerful pharaohs, engaged in huge building projects and international trade. We don't stop here. Is it because in 1997, 62 people, mostly tourists, were massacred here by Islamist terrorists? We see policemen dressed in innocent, pure white shirts and trousers, carrying machine guns, all along the road.

The tombs are splendid, some even brightly colored with pictures and elaborate hieroglyphs. The tombs are a sort of universe, with stars and Ra, the sun god, on the ceiling. A female figure, Nut, is stretching her arms all across the ceilings to protect the deceased. One of these tombs contains King Tut, but we don't enter.

As soon as we leave the tombs, we are accosted by men and boys. "Postcards, one pound! Scarf, one pound!" they cry. Everything seems to cost one pound. Until I try to buy a book and find that this one item actually costs 100 Egyptian pounds (about $9). I don't do a very good job of bargaining, but I'm satisfied that I got it for 50 pounds.

We return to the ship for lunch. Our ship is a five-star boat, and it shows. I love the wood paneling and our crystal chandelier in the entrance. The food is excellent and opulent. We eat at tables with starched tablecloths and napkins.

In the afternoon we hop on the bus again, on to Karnak. I ask Mohammed if Karnak is a temple or a tomb. "Frau Nanz! I am disappointed in you. What did I just say this morning? The tombs are on the west bank and the temples on the east." I don't even know which bank we're on. I got all disoriented during the bus ride. But I say nothing. I don't want to appear even dumber than I already do.

We learn about the god Amun. Mohammed tells us that this god, who sometimes looks like a man with two feathers in his crown and sometimes like a man,actually represents the invisible god.

"There is so much in the ancient Egyptian religion that we have in Islam and Christianity," he says. "They believed in eternal life, in a resurrection from the dead. You can even see the scales used in the final judgment. It's all there!" He's gesticulating wildly, walking from person to person, resting his hand on an arm of someone for a few seconds, until his excitement makes him move on. I'm getting excited, too. A god representing the invisible divine power! Our God! The Spirit behind all creation! I am almost breathless.

As soon as he is finished lecturing, I walk quickly so that we can return to the bus together.

"You seem to see a connection between your Muslim religion and the ancient Egyptian one, not a contradiction. Is that so?"

"Oh, yes, indeed! That's what's so wonderful about this. The more you study this, the more you find. It is a continuation! You see, it began here, and already there were hints of the truth that would be later revealed. It went on, later finding more in Christianity, and then continued into Islam."

I'm not content with this answer. I know that Jesus is crucial to our understanding of Christianity, and to the meaning of my own life.

"But there are also differences," I protest. "Jesus made the scales unnecessary. He brought mercy and grace to us. He took all our stupidity and sickness, all our wrongdoing onto himself, making it possible for all of us to live in paradise forever, without having to earn it."

"Ah, there's a lot to discuss here," he answers diplomatically. End of subject. I ask about his work, his family, as we walk back to the bus. I learn that Mohammed has had no work since the revolution began in January. In January, all tourism stopped abruptly. It became too dangerous. So this meant no more income for his family. He has a wife and four young children living near Cairo. How do they survive? I'm going to give him a huge bakshish, (tip), I promise myself.

Over dinner, I tell my companions at the table about Mohammed's situation. Holger says, "He probably has two wives." I feel like hitting him. His wife, whose eyes are as pale blue and cold as icicles, says, "Four children? That was poor family planning." I turn away, disgusted by their callousness. Germans! They're not enough interested in him to care whether two of his kids are twins, so I don't bother telling them.
Posted by Noreen at 7:49 AM