If You've Drunk from the Waters of the Nile...Day Six

Yesterday before going to sleep, I prayed to meet more Christians. I want to be able to find out about the situation of Christians in Egypt.

Gabriel has made a big impression on me. He simply lives for Jesus. He looks cheerful, calm, sane. In his shop I feel like I'm in an oasis, away from all the predators. I go to his shop again. "Sit down," he says, offering me a chair. "You prayed for me yesterday, didn't you?" he says. I nod. "I sold two books after you left the shop." He's delighted to have sold only two books!

Today we talk about Muslims. I can imagine that the Christians and the Muslims live in completely separate worlds, separate communities, although they're citizens of the same land. I tell him that in Germany, I don't have a single Turkish friend, although they make up about 4% of the population. He agrees that the situation is exactly the same in his life. I tell him about Mahmoud, about Mahmoud's mother who has cancer. Mahmoud is afraid for his mother. Gabriel's response is that we all will die someday, but that death is not the end. There is an afterlife called heaven, he says, and Gabriel is sure that his mother is there right now, and that he will meet her there after his death. "There's no reason to be worried," he says. "We have Jesus." He tells me about some Muslims who have become followers of Jesus Christ through a Coptic priest who is on television every day - Father Zacharias.

I am so moved by all this talk, I find myself praying all the time. I wonder what else will happen on here in Egypt.

Peter wants to write emails this morning, so we take the laptop into the lobby, where there is free wi-fi. A mother and a little girl about six or seven sit near us on a neighboring couch. The girl seems curious about what we're doing, and keeps walking over towards us. Peter asks her, "Can you speak any English?"

"Jesus loves you," the girl replies. Our eyes pop open wide. This, in Muslim Egypt?

I ask the mother, "You are a Christian?"

"Do you love Jesus?" is her reply. There lies the difference. Some are born into a family with a Christian heritage, but apparently have little or no active faith. This must be how Egyptians differentiate between nominal and committed Christians. Again, I am moved by the courage of this family to be so open about their faith. 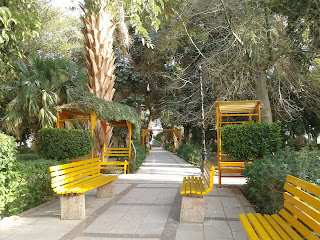 Peter and I have hired Mahmoud to get a motorboat today to take us to the botanic island, commonly known as "Kitchener's Island", named after Lord Kitchener, an Englishman stationed in Sudan in the late 19th century. Lord Kitchener was granted this island by the English government in gratitude for his military service in Sudan. Mahmoud tells us that Kitchener subsequently evicted all the Nubian inhabitants of the island and then imported thousands of plants and trees, creating a garden paradise of his island. Now it is owned by the Egyptian government. There is a research station as well as the park on the island.

The park is tranquil, exquisite, a piece of paradise. The trees are all marked in Arabic and English, and we see all sorts of species of palm, acacia, and even red poinsettias growing in their native habitat! I remember that poinsettias need exactly as much darkness as light in order to develop their deep red leaves. Obviously, they get that here. The park is spotless - not a speck of garbage anywhere.


The day is perfect - warm and sunny, not too much wind.  Groups of young women in their hijabs, students, families.  We are bathed in tranquility.  We gaze at the banks of the Nile, where we merge with thousands of years of history.  There are the tombs of the Nobles, buried over 3,000 years ago.   There passes a falouka, constructed in more or less the same way, with the same materials that were used in the times of the Pharaohs.  I feel connected to the earth, to history.  We stroll, reading the names of the trees that Lord Kitchener, long deceased, planted.  The trees are alive and well.  We join Mahmoud.

I ask Mahmoud about his mother. His face is gloomy as he tells us that her prospects are not good - her cancer is advanced, and was only recently diagnosed. She has to go to Cairo for the operation, and the entire family has to donate blood for her. It will be very expensive, he says. Then he shrugs. "This is the way of life," he says. I wish I knew I could trust him! Is he just trying to get our money? Is he playing on my sympathy? Is he honest? I don't know. All I know is that I could pray for her, if he and she would allow me to do so. But what then? I begin to fantasize about Mahmoud kidnapping Peter and me, once we're in his house, or refusing to take us to the airport. (We've decided to give Mahmoud our business and to forget about Yassir's "bargains" for "special" guests.) But what does he really want from us? He never accepts our money for himself. We always have to give it to the person he has hired - to drive the car, or to man the falouka or motor boat.

Later that day I go back to Gabriel and tell him more about Mahmoud. "Noren sic", he says, "don't be pulled into this. I know all about the health system here. My mother died of cancer, remember? Every Egyptian is entitled to free health care. Every Egyptian. It should all be covered."

I tell Gabriel I want to pray for Mahmoud's mother. "Just pray," he says. "Don't give any money."

I take my laptop into the lobby, where there is free wifi, and check out this Father Zacharias, whom Gabriel told me about. I learn that Muslim radicals murdered Zacharias's brother, and so now Zacharias has no inhibitions about telling the Muslim world what is in their Koran and in other religious writings, the Hadith and Sira. He finds outrageous statements and tells his viewers all about them. Arabic Muslim journals call him "Islam's public enemy number 1." There's a 60 million dollar bounty on his head. This man provokes devout Muslims shamelessly.

I don't know what to make of the man. Gabriel admires him. But this man uses his courage to divide people. I decide not to make judgments about him, but to think about how far my courage goes. I want to offer to go to Mahmoud's house and pray for his mother, but I'm afraid. Peter is petrified about all the things that could happen if we go there, but he's willing to go with me anyway if Mahmoud allows it. I decide to offer Mahmoud a visit to his mother with the purpose of praying for her - in Jesus' name. If he allows it, it's the right thing to do.

It's becoming more and more clear to me that I'm not only in Egypt to do sightseeing. I know that I am here to pray for Egypt. That also means, to pray for all the Egyptians I meet, in some form or other - whether it be through a visit to their home, or a silent lifting up that person in my heart to God. 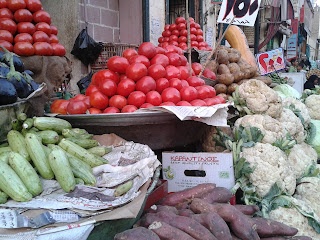 After the botanic island, Mahmoud and his motor boat driver drop us off at the mainland.  Peter wants to show me parts of the souk we missed the last time.  "Here there are no tourists," he says.  "People leave you in peace."  It is wonderful.  We watch people worshipping at a mosque.  The doors are open - anyone can see them.  Amazing, this land, where people can worship God so openly - at least, as long as they're Muslims.  But these Muslims are obviously devoted to God, and it feels good to witness such sincerity.  We see live animals for sale, brilliant vegetables, I buy some jojoba oil at a reasonable price. 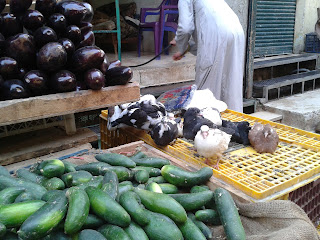 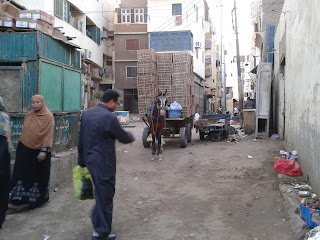 There's a donkey, laden with crates twice as high as his body.

We are delighted - off guard.  And my stomach is bothering me.  This, after thinking I'd avoided any problems.  We pass a little shop with strange gourds.  The shop keeper lets us touch the gourd.  "It's good for an upset stomach," he says.  I tell him I'm having problems.  "Then I have just what you need.  Come inside."  We come inside, and learn that he is a doctor from Khartoum.  He knows all about herbal medicine.  And he really seems to know his stuff.  He gives me a first-rate massage, except his hands get a little high on my crotch, and I tell him to stop.  He stops instantly.  He gives me tea for my stomach.  He asks about other ailments.  I open up and tell him about pains in my hand.  By the time we leave, we are rid of another €100, and are loaded down with creams, a huge bag of fenugreek, and herbs for every imaginable kind of ailment.  We've been hoodwinked again.  When will we ever learn?

That night before bed, Peter says, "I think I know how they get us.  It's when we mention any kind of physical problem.  We have to keep quiet, never mentioning any problems, any interest, and never go into a shop.  Then we should be OK."

Ah, well, maybe the herbs and creams will help me.  It could be worse.  I have loved the entire experience, except maybe the moment when the hands of my Sudanese "doctor" reached just a little too high on my legs.  I'm prepared for a new day, new adventures.  I pray for Mahmoud and Gabriel, that they find wives, that they get more customers.  And I pray for Mahmoud's mother.